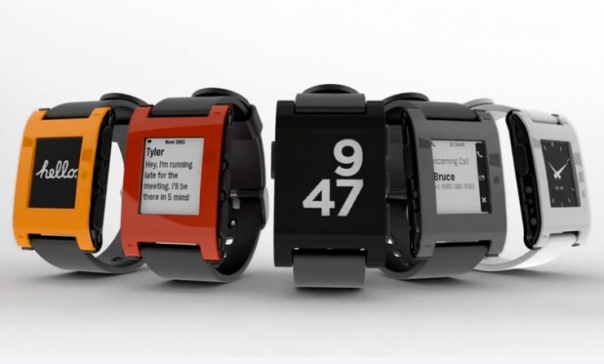 For months I’ve been waiting for a device that I was certain would change the way I interacted with my smartphone, the Razer Nabu Smartband. But while waiting for it’s release I continued researching other smartwatches and smartbands. My fitbit flex died a couple months back and my first goal was finding a new fitness band that had (gasp) a clock! I had considered the Pebble at one point, but it had two things working against it. One, it had a price tag of $149 and two, it didn’t do continuous monitoring, which made it’s usefulness as a fitness band much less attractive. But then one day the news came to the tech blogs that changed everything. The price dropped to $99 for the original model, and the device now supported continuous monitoring, with only negligible impact on the 7 day battery life. My excuses gone, I plunked down the cash and picked up a Pebble Smartwatch. I’ve been using the device for over a month, so here are my thoughts.

This device does everything I wanted it to do when I bought it. The pebble app has a ‘’store” offering a wide variety of watch faces, and using them I now have a few different faces telling me the time, date, and weather. I find it fun to switch between my standard watch faces to more fun ones like my Superman watch or my Dr. Who watch (12 doctors means each hour they show you a face but no hour – so you gotta know which Doctor it is!) So the “telling me the time” piece was handled.

The app store also offers a fitness band app from the makers of Misfit (which has it’s own hardware if you’re interested in a fitness band). This app allows me to track my steps just like my old Fitbit Flex. It seems pretty accurate, so I’m happy with that piece.

The set up to receive notifications of text messages and emails was seamless, and very user-friendly.  The watch will even alert me of incoming calls and I can reject them from my wrist if it’s not a convenient time to talk.  I find these features to be very handy, as much as I expected it would be.

Beyond those three features that were requirements for purchase, I have found several other apps that I use regularly on the Pebble. One is a multi-timer, which I have set up to open with a hard press of one of the buttons on the right hand side of the watch. This give me access to a timers, stopwatches, and alarms all with one press. It works from everything from cooking to timing my child’s daily reading. Another app is the “music” app, which comes standard on the device (no store required). This app allows me to control the music playing on my phone from my wrist. This comes in handy when I’m using a bluetooth speaker at home and want to change tracks from across the room. It’s also handy when driving, as another way to leave my phone in the seat next to me, and decrease distracted driving opportunities.

Beyond these main apps, I haven’t found many other uses for the Pebble. I installed the Pebble version of Tetris (Pebtris) for a kick of nostalgia, but I found the controls very cumbersome (big surprise!).

Two final things to point out, and they can’t be understated.  First, unlike the majority of Smartwatches currently on the market (or coming soon), the Pebble is compatible with both Android and Apple products.  This is very important.  While Android has been pumping out some very cool devices lately, iPhone owners are out of luck.  And no matter how much they want to use that new Apple Watch come January, Android users won’t have that option.  The Pebble is truly one of the few smartwatch options that works on both.  Android connected watches will have a few more options than their Apple counterparts (with their open system approach), but both systems will support all primary functionality, seamlessly. 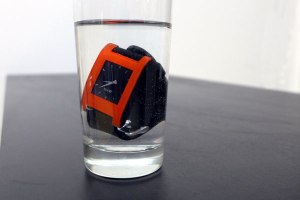 And finally, the Pebble is waterproof.  Meaning you can submerge this thing in water and you will have no issues.  I have tested this (nervously), and it works great.  If we are moving into an era of wrist computers, it is imperative that they be waterproof, because that’s a pretty big risk to be taking, just to wash your hands, with a computer strapped to your wrist!

For all the things a Pebble can do, it is still a limited device. It is an extension of your smartphone, and really nothing more. Aside from the clock (and a few select apps), the device requires a connection to your phone. I am hesitant to include this fact in my “half empty” section because I’m an advocate for our wristbands not being “wrist computers”. I am not a fan of having another device that pulls us into the internet and away from what is going on around us. So I should be happy that the Pebble’s functionality is limited (versus the higher functions found in Android Wear and the forthcoming Apple Watch). But as I’ve used this device for a while now, there is one thing I wish I could do that I cannot do, and that is respond to text messages.

I experimented with an app that allows you to create five preset text responses, to select individuals, but I’ve found that difficult to work with, to put it nicely. I think it’s great that I can see my texts on my wrist without pulling out my phone. But it would be an enhancement for me if I could make a quick response. Something as simple as “OK” or “On My Way”. But to do that I still have to pull out my phone, and I find that is often the case when I receive texts from people. Email notifications are great because they don’t call for immediate response, but texts are not always that way (rarely in my case). So to be able to speak a text response to the smartwatch would be great. You can do that on the Galaxy Gear, Moto 360, Apple Watch, and many others, but you can’t on the Pebble, and that is the one major piece that I only discovered was missing after I used the device for a while.

he Pebble isn’t trying to be what the other newer smartwatches are trying to be. It doesn’t have a mic or speaker. It’s doesn’t even have an LCD type screen (eInk is the approach with backlight). What this device does is keep you up to date on the things that are important throughout the day, and it keeps that smartphone in your pocket or purse. Want to know the time, date, and current temp outside? It’s got you covered. Text and email notifications on your wrist? Done. Add to that a few bells and whistles like music control, timers, pedometer, and games, and you’ve got yourself a pretty nifty little gadget for only $99. Try to find any Android competitor that is even close to that! But the Pebble is missing that mic and speaker and, like me, you might find that you miss that once you are using it. It’s not a deal breaker for me. I just pull out my phone and send my responses. No biggie. The positives far outweigh the negatives at this point. And the fact that the watch fits on any standard watchband meant I could transplant it to my favorite Fossil band!

While it’s not the fastest, or the most stylish, the Pebble is still relevant for the type of user who doesn’t want another phone strapped to their wrist. So give it consideration if you’re in the market. And if the standard Pebble seems a little to boring, with it’s plastic case, there is always the Pebble Steel, which is much more visibly appealing, while offering very similar functionality (and a higher price tag). This smartwatch has enhanced my life, and kept me focused on what’s important. Hopefully it could do the same for you. 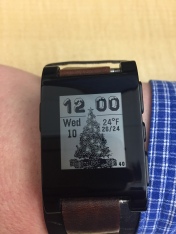