← The Tech of Disney** – Here Come the Reviews!
Apps of Note – Scribblenauts Remix →

The Tech of Disney – MagicBands 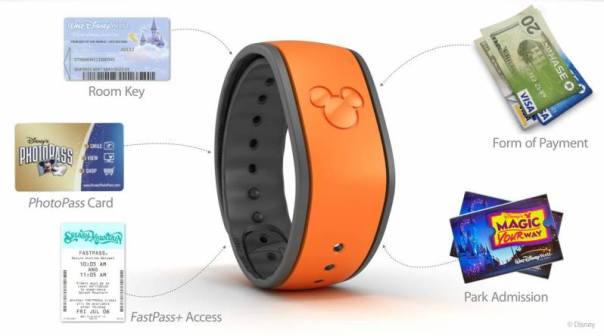 I first heard about the Disney MagicBands from the CIO of Medtronic, who praised the technology in a town hall meeting, after a recent trip to Walt Disney World.  He was drawn to the concept of a single device that could provide a variety of services in a portable form.  I was excited to get my hands (or wrist rather) on my MagicBand for our Disney trip.  Would it live up to the hype, or would this fledgling technology prove unequal to the task?  I’m happy to say that the bands worked like a charm for several specific tasks.  Here they are:

Magicband as a Room Key and Park Ticket 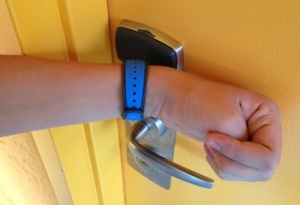 First off, the MagicBand replaces the room key for those staying at a Disney Resort, as we did.  This isn’t a huge advancement in tech, as all it really does is take the chip found normally in the key card of a traditional hotel and places it in the band.  Still it’s great to have one less thing to lose, because unlike a room key in your pocket/wallet/purse, it’s a lot harder to lose something strapped to your wrist (though I imagine some could still manage it!)

While the room key aspect of the MagicBand isn’t that revolutionary, the employment of the Band as a Park ticket is where things start to get interesting.  Now Disney doesn’t care if you pass your band around your group when accessing your hotel rooms.  Those rooms aren’t tied to daily admission.  Park Tickets are costly, and everyone needs their own, so they added a second level of security at the gates to the parks themselves to ensure there isn’t any Band sharing.  When you first scan your MagicBand at the gate, you are asked to place your index finger on a scanner.  This effectively ties your MagicBand to your fingerprint, meaning no one else can enter a park with your MagicBand except you.  That’s a great piece of security that isn’t that invasive to the entrance process.  I had to redo my fingerprint at our second park, but I suspect that happened because I used a finger with a scar that gave the scanner some issues.  Even with the second scan, it was not a time-consuming process.

If you are using a Park Hopper, which allows you to visit multiple parks in a single day, the MagicBand will work for all parks.  You’ll have to scan that finger each time, but it’s usually a one-and-done kind of experience.  We actually hit three parks in one day at one point, and the single park ticket on the wrist made the process very smooth.  By the end of the week, entrance was a science.  Smack your wrist to the Mickey till it turned green, then place finger on scanner until the bar went all blue, and you are on your way! 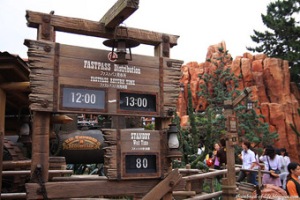 Disney has been using the FastPass option for a while now.  Essentially, a FastPass allows you to jump to the front (or near the front) of the line for the rides.  Every ticket gets you three FastPasses for the day you are in the park.  This isn’t a perk for people staying at Resorts, but having a MagicBand makes using them more convenient.  Without a MagicBand, you are issued a paper ticket for the ride and time for each of your FastPasses.  This means you’ve got three “tickets” to keep track of throughout the day!  The SmartBand keeps your FastPasses for you, and you can double (and triple) check the times via the “My Disney Experience” app on your phone.  A scan of the wrist at the FastPass entrance shows your name on a screen and you are on your way to the front.  Insiders Tip:  They do not check your fingerprint for the FastPass line, so you have the ability to swap bands.  My daughter wasn’t interested in many of the roller coasters that we got fast passes for, so she often gave her band to a more adventurous cousin for a second spin.

PhotoPass is another convenient service provided by Disney.  The parks are filled with employed photographers, all set to take your family photos in front of iconic location like Cinderella’s Castle and the big golf ball at EPCOT Center.  Again, the MagicBand can be used to quickly scan after the picture is taken, and the photo is uploaded automatically to your PhotoPass account.  Another bonus is photo stations located after many of the rides (especially the coasters) where you can view your “during ride” pictures.  You know the ones, with the scream faces! These stations have a place to scan your MagicBand as well, so those photos are instantly added too.

MagicBand as a Payment Source

The final aspect of the Disney MagicBand is the most complicated.  Basically, the band can replace your credit card, so in theory you can leave your wallet behind (assuming you aren’t buying any adult beverages).  Like the secondary security at the gates with fingerprint identification, whenever you use the card for purchase you are required to enter a four digit PIN number.  This is not only a convenient feature, but a required one if you are traveling with children, and you don’t want them buying a bunch of stuff at the gift stores without your knowledge.  Without the PIN, the payment source aspect of the MagicBand is worthless.

If you are staying at a Resort and have a Dining Plan, you can use your MagicBand for that as well.  It requires the PIN number, so keep that handy.

The Disney MagicBand is a truly revolutionary tool within the Parks and Resorts.  Without the band each person would be walking around with a park ticket, three fast pass slips, a hotel room key, a photopass card, and credit card/cash in the wallet.  With this simple accessory all of those items are combined into one thing.  Of course I still got locked out of our hotel room one day when I went next door to talk schedules and forgot to put my Band on.  Thankfully someone was there to let me in.

But here’s what I’m most excited about after using the Disney MagicBand for a week, and that’s the potential wider expansion.  We are already seeing the possibilities with the wave of Smartwatches that are sweeping through the tech festivals this year.  Apple is set to launch their first smartwatch in the coming months.  Android Wear is being adopted by more and more companies.  People often ask me why we need another device strapped to our wrist?  Won’t that just be another distraction?  I agree with that possible outcome if the devices on our wrists are too interactive.  If smartwatches are just another screen to stare at, that is a problem.  Imagine how many people are going to walk into walls as a result!  But if the bands on our wrist can be closer to the MagicBand than the Apple Watch, I think there is great potential for widespread adoption.  With Apple Pay, more attention is being given to the industry of mobile payments.  Google Wallet has been around for a long time, but few use it.  I see a future where your wallet truly is right on your wrist.  And this new technology will be even more secure than our antiquated bar scanner cards, using things like Apple’s fingerprint verification.  The possibilities are limited only by our imaginations!

So if you are off to Disney and staying at a Resort, get ready for the Disney MagicBand, because you will get one.  You can even jazz them up with stick on covers and accessories! Not staying at Resort,  but still want in on the fun?  You can purchase a band for $12.95 and activate all of the goodies already mentioned!

So strap that band on your wrist and wonder at the ease of use, the diversity of options, and the possibilities for such technology beyond the lands of Mickey Mouse, where the rest of the world is just waiting to join in. 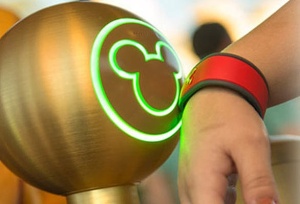 ← The Tech of Disney** – Here Come the Reviews!
Apps of Note – Scribblenauts Remix →