The Kindle is far and away my favorite piece of tech.  I’m an avid reader and every time I sit down with my Kindle Pa 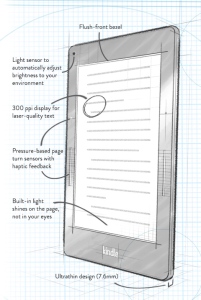 perwhite the act of reading remains the same, but the experience of reading has been revolutionized.  The improvements Amazon has continued adding to the Kindle line just keep making it better and better.  Gone are the days of a physical keyboard (and resulting larger body or form factor).  Gone are the days of seeking good lighting, as most models have a screen that lights up.  And, most importantly, gone is the high price tag of the original models.  While my first Kindle cost $300, the current low end, un-unlit model will run you $79, and that’s with a touch screen (my first kindle was all about the buttons).  My current model, the Kindle Paperwhite, with a lit screen is $119.  A great deal.  While Amazon has consistently added features and reduced price over the years, their newest offering adds the features, but goes the other way with the price.  It’s called the Kindle Voyage.  So let’s see if all the additions make the higher price tag ($199) worth it.

First off the form factor has been changed for the Kindle Voyage.  The previous two models had almost identical shapes.  They had matte finish backs (and associated fingerprint issues) and rounded edges.  The Kindle Voyage has the same matte finish, but it also has more angles, which makes holding the device a little easier.  The new Kindle is also slightly smaller in width, height, and weight than the previous model.  These improvements make it easier to use with one hand, and have longer reading sessions, without resorting to resting it on your lap, or table.

The other major change in the form of the Kindle is related to the raised edges on the old model.  The old Kindle has a drop of a few millimeters from the plastic edge to the screen.  The new Kindle is completely flush.  I like this change a lot.  It has a much better look (though that’s not a great reason to spend extra money), but the main reason I like the flat screen approach has to do with how it impacts the reading experience.

The first way that the new Kindle improved the reading experience is the flat screen in relationship to new buttons on each side.  The buttons are called “PagePress” in the marketing, and they bring back something from the older Kindles that people had complained about losing: the physical page turn buttons.  Unlike the old models though, the PagePress buttons aren’t designed to “click” when pressed, like a standard button.   Instead they are pressure buttons.  So you can rest your thumb on the button and the page will not turn until you apply pressure.  On my Kindle Paperwhite, when I want to turn a page, I lift my finger from the edge of the device and tap the right side of the screen (or use my other hand entirely).  While that might seem minor, the action of moving to tap often causes my grip to change, and I end up resetting my hold on the device every page turn.  With the new model, you don’t have to move your finger.  I know, talk about a first world problem right!?!?  But there you have it, no more finger exercises in page turning.

Beyond the new buttons, the Kindle has a another improvement that makes a better argument for upgrading than the page turning function, and that is “adaptive light”. 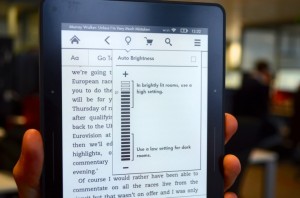 The Kindle Voyage now has an “auto-brightness” feature that you’ll find on almost all smartphones.  So the backlight in the device will adjust based on the lighting around you.  If you enter a dark room the screen will brighten to the optimal brightness for reading (which isn’t the brightest setting, which would be too bright!).  If you are outdoors and the sun is shining, again the screen will adjust, by actually going to full brightness to compensate for sun glare.  This is a cool feature.  While I have brightness control on my Kindle Paperwhite, I find I do adjust brightness a lot, and to have the device do that work for me would be a very nice feature.

eReaders.  Unlike previous years, this model doesn’t just improve pixel density to make the screen appear more like real paper (though it does that too, by doubling the pixels on the screen over the previous model).  The Kindle Voyage improves the form factor for easy one hand reading, and page turning.  And it improves the reading experience via Auto Brightness.

The question that must be asked is whether those changes are worth $80, which is the price difference between the Voyage and the current Kindle Paperwhite.  For me, while I like the changes that price difference seems to be a little too much.  I can move my finger to turn pages, and I can adjust my own brightness.  Others might find more value in those features though, and if so, the Kindle Voyage offers a great reading experience.

A Holiday Note:  The basic Kindle is currently on sale for $59 and the Kindle Paperwhite is $99.  No holiday deals on the Kindle Voyage, but the other Kindles are available for shipping prior to Christmas, so if you’re ready to get into the eReader game, now is the time.  Happy eReading!! 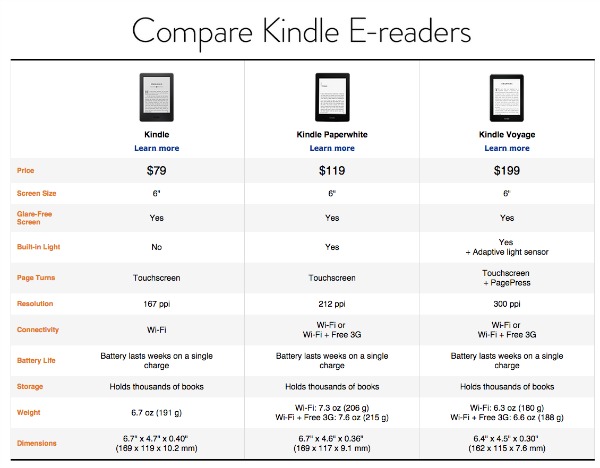 For further review of the new Kindle Voyage, check out these links: