First Impressions – iPhone 7 and 7 Plus 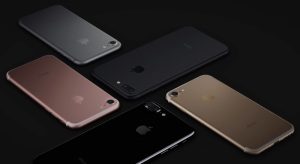 There are plenty of long form reviews of the newest offering from Apple (see a few links below), so let’s keep this one short and sweet.  Apple released a “new” version of their iPhone in September.  They skipped the major form factor update this year because they plan a huge update next Fall, on the 10th anniversary of the release of the 1st iPhone.  So the phone looks the same, and for the most part is the same.  So for these First Impressions we’ll hit what’s new, and the ultimate question: should you update?

Cameras – the iPhone 7 gets Optical Image Stabalization, which assists with our shaky hands for pics.  The PLUS model already had it and still does.  The PLUS model gets a second back camera for a physical zoom feature and “portrait” mode, which blurs the background and focuses on the person in the foreground, which is pretty cool.  Standard updates are there too, for things like “aperture” which no one really understands unless they are hobbyists, IMO.

Home Button – the button doesn’t click anymore!  It’s now “haptic” which means it has a little buzz feel that tricks your brain into thinking it clicks.  The button also has a version of “3D touch” which was introduced on the screen with the 6S models.  Basically a soft touch does one thing and a hard press does another.  Takes some getting used to but it works.  And it’s prepping us all for the removal of the button entirely in the next version.

Headphone Jack: It’s gone.  You’ve heard.  The phone comes with a dongle that works fine with my wired headphones.  I await the sale of another dongle to give me two ports so I can listen and charge at the same time.  The phone is mostly water-proof now as a result, which is a good thing in my books.

New Colors – Two new “blacks” were introduced.  Goodbye to “Space Grey” and Hello to “Jet Black” and “Matte Black”.  I elected for Matte Black, having heard that Jet Black, while very pretty, will scratch like the dickens.  Who told us this you ask??  Apple!!  Not a good sign.

If you have a 6S you should not!  There is absolutely no reason to upgrade if you have last year’s model.  The improved camera and home button are not worth the upgrade.  And by staying put you are perfectly positioned for the big update next year.  If you have an iPhone 6 you’ll want to think long and hard about this one.  If you are doing 2 year cycles, upgrading this year will put you on the outs next Fall.  The tried and true approach of 2 year upgrades to new form factors with iPhone has certainly gone off the rails this year.  So if you like getting the newest looking phone (versus the “S” year updates), then keep that 6 another year.  If you have the battery issues with the iPhone 6 that have been reported, you might find sticking it out 365 more days a challenge.

The Whole Cup Summed Up:

Design: Cup Half Full (unlike many, I think the 6 series is great)

New Features: Half Empty (this is a “S” year masquerading as a major update year)

Upgrade Now?: Half Empty (if you can, stick with what you’ve got one more year)

Overall: Half Empty (I only have this device because I need it for my job.  For my personal device, I’d wait for the big change Fall of 2017)

Long-form reviews to consider, when you have more time: