After much debate I finally gave in a week ago and got a Fire TV from Amazon.  This is the first media streamer offered by the company.  Being that I have used almost every media streamer on the market, I was highly skeptical of Amazon’s entry into an already packed field.  A few unique features had piqued my interest, but it was still a $100 streamer, and that’s not a price point that I personally consider an impulse buy.  It was the gaming feature that I was most interested in, and when I read on the tech blogs that you could use a USB Xbox 360 controller (which I happen to have) instead of buying the $40 amazon controller, I took the plunge. 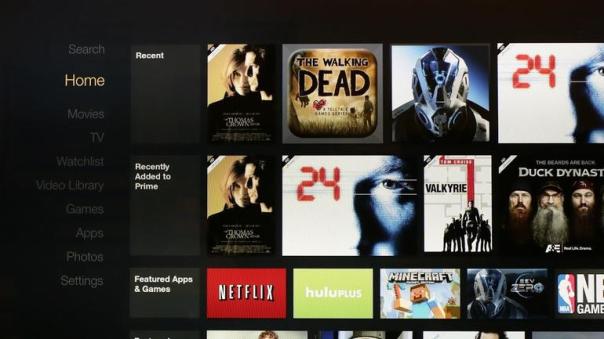 Like all things Amazon, the setup is a breeze.  Frankly, I’d be surprise if someone could mess up the process.  You just plug in the HDMI to your TV, and then turn on the power.  I quickly discovered that you are immediately greeted by a non-optional tutorial video.  After that you are up and running.

If you own a Kindle Fire tablet, all of your apps that are compatible with Fire TV will be there.  And adding new ones is super easy.  There are plenty of free channels, including several free games to let you test out the device.

Almost all of the major content providers are represented: Netflix and Hulu chief among them.  Of course Amazon has their videos (both Prime and Purchase) front and center.  The remote has a well publicized “voice search” option, which works well, but only with Amazon content.  Interestingly, I did a voice search for a game I knew was in the store (because it was well reviewed on a website) and the search couldn’t find it.  So there’s that.

Finally, the gaming experience has exceeded my expectations.  Bear in mind I am not a hard core gamer by any stretch.  I prefer Mario over Halo.  I liked a few of the games I was playing, “Dream Flight” being the one I spent the most time playing (and it cost me a whole dollar!).  Then I plugged in my USB controller and loaded up “Asphalt 8”, which is a car racing game.  And I was blown away.  The graphics are on par with the original Xbox, and the game play is easy.  And the game is a blast.  And it’s free! You get to play a few courses before you start needing to either win races to get money or pull out your credit card.  I can see myself really getting into this game.  And for this reason alone, I’m happy I made this purchase.  But I’m not happy with everything.

Netflix is a rental company, they always have been.  Their goal is to get your monthly dues and then that’s it.  No strings.  Amazon is an entirely different beast, and it’s nowhere more evident than on the screens of the Fire TV.  Amazon wants you to buy things.  On the Fire TV they are mainly peddling movies and TV shows.  I would imagine that as their Prime Music service is developed, that service will follow a similar path.  And that is my first beef with the Fire TV.  When you use the very cool voice search option, you will get content but you won’t know off the bat if content is Prime (meaning free with membership) or if you’re going to need to drop some coin to get to watch it.  That really frustrates me.  I rent my fair share of movies on Amazon.  I’m not opposed to that aspect of the company being the replacement for Blockbuster Video.  But when I want to browse the “free” stuff, they are not making it as easy as it should be.  And certainly not making it as easy as Netflix and Hulu make it.  But Amazon is a content seller, not a rental service provider.  That’s why Prime Videos and Prime Music still feel like a perk to the service versus a fully fleshed out service standing on it’s own against it’s competitors.

My other issue with the Fire TV is the User Interface (UI).  Basically, that’s the screens that you browse through.  The structure of the screens is not as smooth as the UI on Roku or Apple TV.  And, again, they are constantly steering you towards Purchase/Rental Content, which just makes it feel like you have a salesperson in your living room trying to constantly make you buy things.  They don’t need to push so hard, in my mind.

The Fire TV is most definitely a first generation device.  Since I’m usually an early adopter for tech toys, I was prepared for that going in.  The first Fire tablet was replaced by the infinitely improved Fire HD and HDX tablet lines, and I’m certain that is what will happen with the Fire TV (assuming they are selling enough units to keep the line going).  The next generation will have an improved UI.  I’m not sure if they will ever make the Prime stuff separate from the rest, but there are still plenty of things they can do to make browsing content a better experience.

The strongest thing the Fire TV has going for it, which also seems to be the thing they are pushing the least, are the games.  At $99 it is easily the cheapest gaming system you can play on your TV with a traditional controller (except for a couple Kickstarter systems perhaps).  The support for USB controllers is nice, and 3rd party companies will certainly make Bluetooth controllers below the $40 price point for Amazon’s branded device.  And that is something that Roku has only tried casually, and Apple TV hasn’t tried at all.  But we will probably have to wait for the Fire TV 2 to see the improvements that will make this device a must own for the casual gaming, and casual media watching crowd.

This post will be updated when I have used the device long enough to give a more detailed review.

Posted on August 15, 2014, in First Impressions. Bookmark the permalink. Leave a comment.