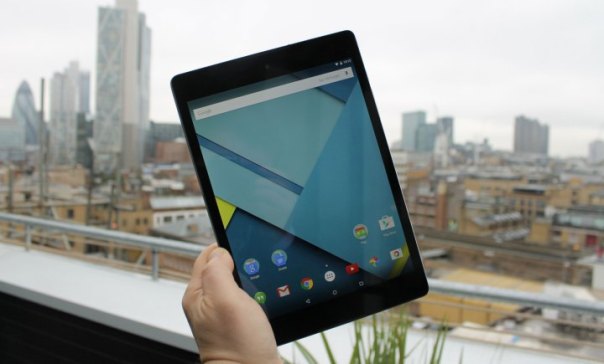 When I took the Nexus 9 out of the box, the first thing that struck me was the unique size.  I’ve had several 7 inch tablets, and also a 10 inch iPad for many years, so when I first took this 9 inch device into my hands I was a little perplexed over the reason for such a size.

It’s basically a small iPad or a large iPad Mini (to put it into the Apple terms that most would be able to relate to).  The device most similar to the Nexus 9 on the market right now is the Kindle HDX 8.9 from Amazon.  That particular tablet can go toe-to-toe with Nexus 9 in terms of specs, but comes in $20 cheaper.  Of course, the Nexus 9 gives you a clean Android operating system, versus the highly customized Kindle software.  So maybe the $20 saved isn’t worth it, if you want more than Amazon’s somewhat limited app selection.

The battle over tablets has reached a fever pitch in the past couple of years.  Some signs even indicate that the devices have peaked, as sales are starting to flatten out, or even drop in some cases, in terms of year-over-year growth.  Even the all-powerful iPad is not immune to this.  Simply put, people who wanted tablets bought them, and now they don’t need another for at least two years, and in many cases the time is much longer.  So the tech companies are now heading back to the drawing board of sorts, trying to come up with the next evolution of tablets that will bring consumers back to the table.  It’s my opinion that the Nexus 9 is the first effort from Google to do just that.  They haven’t done anything huge yet, but by placing the size smack-dab between the small and large tablets, they are in effect offering a middle of the road option for consumers uncertain about what tablet they might prefer.  The battle for tablet consumers is only made more intense by the increasing size of smartphones.  Where “phablet” was once seen as more of a joke than an actual phone people would want, now the market for the 5 inch screen on smartphones is the strongest of the lot.  So as the 7 inch tablet starts being challenged by the smartphone market, and the 10 inch tablets are often seen as too high priced for many consumers, tech companies are looking for ways to offer a better tablet at a competitive price.  And that brings us to the Nexus 9.

I did not initially like the Nexus 9.  I used it casually over the course of the week, and found myself longing to return to my standard iPad Mini.  But then I sat down with the device for a few hours and really dug into it.  I got to know the new operating system, Lollipop, and then my attitude started to change.

Lollipop does something that comes as a shock to tech followers

, it finds Android copying Apple!  It’s been the other way around with Apple ripping off Android for so long, it’s kind of refreshing to see the flat simplistic approach Apple employed with iOS 7 (and now iOS 8) brought into Android’s Lollipop. It’s a welcome change.  The previous operating systems, Jelly Bean and Kit Kat, were often way too dark, and the buttons didn’t always make the most sense.  That all changed with Lollipop.

I like many of the features, but I will focus on two of them here.  First is Multi-User Access.  I had the original Nexus 7, and one feature I liked about that device was the ability to set up a “guest account” so others could use my device without messing up my stuff.  Lollipop is making multi-user accounts even easier.   You can swipe between Google accounts easily, if you’re like me and have multiple email addresses for various reasons.  But you can also create additional profiles that can have total access to your google apps, have limited access based on your settings, or have unique profiles built from the guests own google apps using their login information.  It’s easy to switch between accounts, right from the notification screen, and the setup was a breeze.  This is a feature missing from iPads, and it is a key advantage Android has over Apple currently.

The other setting option I like is all about the battery.  Sure all mobile devices have battery settings.  This is where you can see your percentage and turn on your “energy saver” (which the Nexus 9 also has).  But the difference with this device is that it will calculate the estimated battery life and graph it for you, so you have a good idea how long you’ve got before you need a charge.  I tested out this feature with the screen at full brightness and then at minimal brightness and I saw a four hour time difference in battery life!  That’s very useful and very telling about what exactly is sucking the life out of your battery.  And it isn’t your addiction to Candy Crush (probably…)

Finally, I absolutely love the speakers built into the front of the device.  This is HTC hard at work moving those speakers from the bottom of tablets to the spot where they belong.  The Nexus 9 cranks out the sound.  It’s not quite as good as the speakers you’ll find on the Kindle Fire line, but it’s better than anything Apple is doing these days.

Google tries to sell the Nexus 9 as a “one-hand tablet” but I didn’t find that to be the case for me.  It’s simply too wide.  It suffers from the same issue as the iPad Mini.  You can’t one-hand the device.  To be fair, the rubber back of the Nexus makes one-hand holding a little easier than the metal-backed iPad Mini, but it’s still awkward and risky, unless you’ve secured it in a solid case.  Beyond the size of the case, the build quality of the Nexus 9 just doesn’t seem on par with other $400-$500 tablets.  It feels more like a $200-$300 tablet.  By feel, I am referring to the cheap rubber back, and the cheap glass.  You’ll find the oils in your fingers will smudge both sides of the tablet very quickly.  I did side-by-side testing with an iPad to see how quickly fingerprints appeared, and the Nexus was immediately evident with a couple taps on the screen.  The iPad put up a better fight, and that is because of the quality of the glass, and the way the glass screen is attached to the device (iPad glass is glued to the surface of the screen versus laying on the screen like the Nexus 9).  In addition the volume and power buttons are loose and, again, feel cheap.  Google contracted HTC to build the Nexus 9 and the only evidence of that are the metal edges, which show just a shadow of the beautiful HTC One smartphone line.  I wonder what the Nexus 9 would have looked like if Google had allowed HTC to bring that design to the larger form.

While I really like Lollipop, there is one element that frustrated me, and that is the multitasking pane.  When you click the multitask button (right hand button), you get a tiled view of all your open applications.  It’s similar to Safari’s Multi-Web page view, for those familiar with the design.  You can scroll through your various apps and move between them easily, but when you swipe them away you must do this smoothly or the app will bounce to the side and stay in place.  I found that the multi-task pane filled up with lots of apps quickly, and it was a chore to clean up those apps running in the background (which is definitely a good habit to save on battery life).

The last issue I have with the Nexus 9 is the price.  The 16GB model starts at $399 and that is simply too much for this device.  Since the device doesn’t offer expandable memory, you’re probably best served with the 32GB for $479, which is the largest you can get (no 64GB at this time, unlike many other high-end tablets).  The general consensus among reviewers is that the Nexus 9 is a great $299 tablet, and I would agree with that conclusion.  With a better build, the device’s software certainly justifies the cost, but the Nexus 9 isn’t there.  Remember that Lollipop is very new, so while it is currently only available on a few select devices, given a little more time you will be able to experience this operating system on many other smartphones and tablets.

The Nexus 9 ended up being a much better device than I thought it was going to be.  While the device looks and feels very mid-level for a tablet, what is under the hood is actually very impressive.  Lollipop is a huge step forward for Android; It is an operating system that feels much more consumer focused than previous versions.  I am certain that consumers who are less comfortable with this type of technology will feel fine on the Nexus 9.  But should they get it?  Is it worth the $400 price tag when you can get an iPad Mini with similar specs for $100 less.  Or an iPad Air with superior specs for $100 more?  I would say to steer clear of the Nexus 9 at this point, unless you really enjoy the Android operating system.  There are certainly plenty of people out there who love Android the way others love Apple.  And for them the Nexus 9 is a good choice.  It’s the best tablet yet of the Nexus Line.  It offers amazing speakers and a size that makes it more useful than the typical 7 inch tablet.

The Nexus 9 is the first entry in what I think is the next evolution of tablets.  People are used to their 7 inch tablets and 10 inch tablets, and they don’t need new ones.  Well, the tech industry won’t stand for that! They need to get everyone excited again!  The Nexus is a new size (well Kindle did do it first, I guess) and it indicates a trend to the tablet line that is looking for a way to differentiate themselves from the giant smartphones (iPhone 6 Plus, Samsung Note 4).  I’m excited to see what is coming in the next year.  New tablets and smartphones will continue to change the landscape and hopefully the casual consumers who bought iPads by the truck load will reap the benefits.